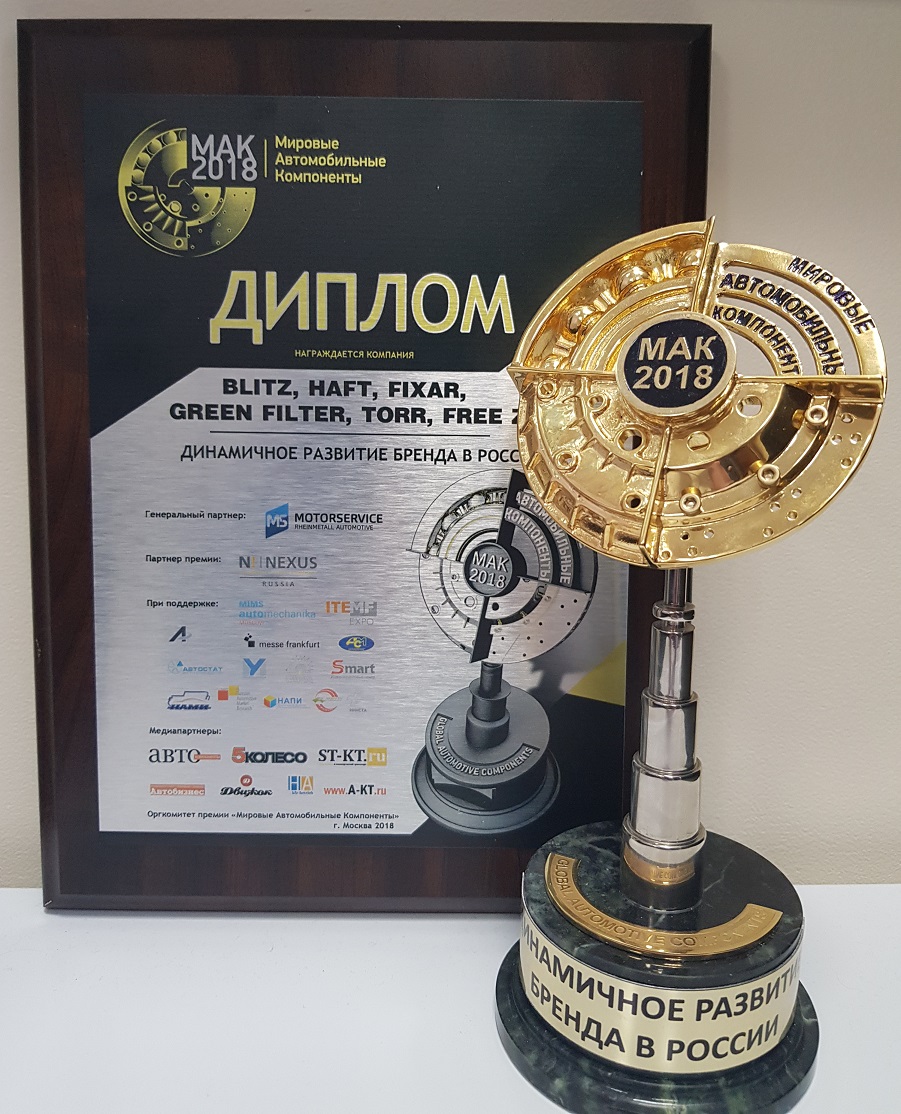 The "World Automotive Components" Award is one of the most important events on the Russian automotive component manufacturers market. Every year more and more interest is growing to the contest, gaining momentum both among reputable experts in the industry and among ordinary car enthusiasts.

In 2018, over 25,000 people voted for the award nominees, among which there were 230 brands from 25 countries. Numerous Internet users, representatives of auto dealerships and service stations, distributors of automotive components - all participated in a large-scale voting, which resulted in the selection of winners in a wide variety of nominations.

The company's general director, Eduard Digel, noted that this victory is the best evidence of recognition of the results of the hard and fruitful work of a team of professionals, engaged in the development of such brands as BLITZ, FIXAR, FREE-Z, GREEN FILTER, TORR, HAFT.

Carberry GmbH is not going to stop there: the main vector of our work is continuous improvement and enhancement. We are very pleased to receive the MAK award in Russia, which reflects an independent expert opinion on the automotive component manufacturing market. Customers have already loved our brands, they trust our quality products - and we, in turn, will try to continue to delight them and find professional solutions for the industry as a whole. 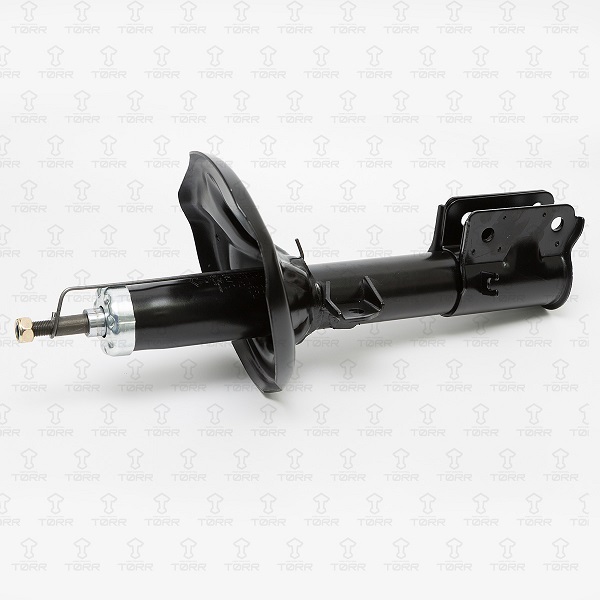 According to experts, shock absorbers belong to the category of automotive components, which significantly affect the performance of the suspension as a whole. It is not surprising that in most cases, after installing new shock absorbers, the driver can immediately sense certain changes in the car behavior. For objectivity and a more detailed display of the effectiveness of the shock absorbers used, special - bench - tests are required. Such tests allow, using express analysis of the shock absorbers behavior, to give a clearer picture of their condition.

In this regard, for th Carberry company, producing a wide range of automotive shock absorbers of the TORR brand, the results of similar comparative tests organized by the leading Russian automotive Internet portal have become very revealing. But before sharing these results, we’ll give a little background.

The portal's editorial board uses a number of vehicles, including the popular Santa Fe Classic modification. When the mileage of this car exceeded 64 thousand km, the test pilots of the editorial board decided to carry out a comprehensive diagnostics of its suspension in one of the service centers of Moscow. One of the stages of this procedure was to check the chassis on a special vibration stand, which is part of a multifunctional diagnostic complex. Such a test, imitating the movement of a car along a rough road, makes it possible to evaluate quantitatively (amplitude of rod oscillations) and qualitative (efficiency) indicators of all four shock absorber spars in dynamics.

As it turned out during the initial testing, the car was driven to the diagnosis on time. Specialists who helped in the measurement, noted that the right and left front shock absorbers have a residual efficiency of 67% and 68%. Simply put, they are close to their limits. For reference: 60% is the limit value below which the assembly should definitely be replaced. The front shock absorbers also recorded a significant variation in the values of the clearing-compression stroke (22%). It is obvious that, taking into account the indicators noted above, the recommendations of the technician turned out to be quite predictable. He strongly advised replacing worn shock absorbers in the front spars, and the sooner the better. More favorable situation has developed with checking the rear spars parameters. By the residual resource, they turned out to be noticeably better than the front ones, so they decided not to touch them yet.

As for the recommended replacement of the front spars, here, after a brief search on the Internet, for Santa Fe Classic, it was decided to purchase a set of gas-filled shock absorbers of the TORR brand. The portal employees motivated their choice with a number of design features of these components, favorably affecting the performance of the suspension as a whole. Among such features of TORR products, for example, highly reliable valve-type disc-type mechanism, which was previously used only in premium segment shock absorbers, should be noted. This type of mechanism has a number of advantages, the most important of which are good wear resistance, response accuracy and more stable indicators of clearing and compression forces.  Besides, in the TORR shock absorbers such operational defects as misting or oil leaks through the sealing gland are almost completely excluded. This feature is achieved through the use of own design unique sealing glands.

As a result, for the Santa Fe Classic TORR brand shock absorbers articles DV1279L and DV1278R were ordered in one of the online stores. Their installation was carried out in the same dealership where the primary suspension diagnostics were performed. Naturally, after the TORR shock absorbers were installed on the car, it was again “driven out” through the diagnostic vibrobench. Measurement data obtained during retesting demonstrated a significant improvement in suspension performance. Thus, in accordance with the results of research, with TORR shock absorbers, the spread of the front “dampers” rod stroke values was only 5%, and their efficiency was recorded at 90-92%. Excellent result! By the way, according to the subjective sensations of test pilots, the reaction of the updated suspension to road irregularities also improved - it became more “intense” and more comfortable in perception.

When, after this test, Santa Fe Classic dashed off on the updated suspension for more than 300 km, it was again sent to the vibrobench, but for an intermediate diagnosis. It showed that the multi-kilometer run-in went well for the new shock absorbers. In particular, if at the rear absorbers all indicators remained the same as in the previous measurement, then for the front ones they clearly improved: improved performance readings and a 2% decrease in the spread of the rod stroke values.

And finally: as representatives of the Internet portal told us, autoexperts have planned another, already final, test of TORR shock absorbers, which will be held after a longer (10 thousand km) Santa Fe Classic run on an updated suspension. When these tests are completed, their results will also be published on the Internet.